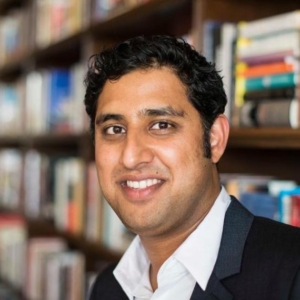 Rajiv Joshi is a pioneer of responsible business and social transformation. As an economist and renowned voice on global issues and ethics, he co-founded The B Team in 2012, which he led as its first Managing Director until 2019, together with some of the world’s most influential CEOs and former heads of state, to catalyse better business practices for people and the planet. Rajiv is currently developing Bridging Ventures, a platform for cultural transformation and radical collaboration and is Special Advisor to Mission 2020, convened by former UN Climate Chief, Christiana Figueres.

Rajiv is Executive-in-Residence and Advisory Council Member at Oxford Säid Business School and part time Research Scholar at Columbia University, School of International and Public Affairs. Rajiv previously drove the Global Call to Action Against Poverty, the world’s largest civil society alliance working to end poverty and inequality founded by Nelson Mandela, was a Trustee of Oxfam, and is former Chair of the Scottish Youth Parliament, its first minority-ethnic leader. Rajiv was part of the Glasgow Anti Racist Alliance and a publicly appointed member of the Equality and Human Rights Commission in Scotland and played a critical role in the establishment of the UN Sustainable Development Goals.

Rajiv holds a First-Class Honours Degree in Economics from the University of Strathclyde Business School and a Masters in Public Policy and Administration (MPA) from the School of International and Public Affairs at Columbia University. His family originates from Kenya and India, he was born and raised in Scotland and is now based between New York, London, and Edinburgh.